My nearly three year old is in the height of his imagination. He sees things that aren’t there all the time. This phenomenon astounds me. So many children are the same. They talk of the “people in the walls,” or they have friends called “Kiki and Bobo” that only they can see.

My boy is an exceptional dreamer…or at least I like to think he is exceptional because I hear and see him imagine every day and see things that I can no longer see. He talks about giants in the trees with red hair, little eyes a big nose and a little mouth. He talks about magic beans that fall from our ripening plum tree and gives them to me to eat. He talks about lions that have sharp teeth and seem to prowl him at night and he talks hauntingly about dragons and other mythical monsters that he’s come across in picture books.

His visions have made me reflect on the way I used to be as a kid. A girl immersed in imagination. In a childhood before the IBM computer became a staple in every house, I would play make believe. I have vivid memories playing with my friends in their lush back gardens full of sunflowers and tall grasses. We would gallop around and create a world of horses and hierarchy.

We would run and hide in the endowment lands of Vancouver’s ancient forests and whisper fairy messages to one another. We’d giggle and believe and be excited by the idea that perhaps just beyond our noses a real fairy was watching. I would tell tall tales with flashlights and scary stories about Bloody Mary and be too afraid to flush the toilet because it was the roar of her monsters from the deep.

It was all in our minds and yet it felt so real. All of it made my heart tick faster and create more excitement at the prospect that my reality, in the comfort of my everyday was not all that there was.

I began to draw. I’d say properly draw to an obsession at age 8. I would fill countless journals with characters, only characters really because I wasn’t particularly gifted artist at landscapes and realism, but I liked character. I would tell a story in my mind about the characters. To any outsider looking in, they would see a couple of goofy looking dogs with big eyes. But to me I had an epic story behind them.

The dogs had been separated from their family and were lost in a city. They had to fight against the urban jungle to reunite with their loved ones they’d lost back in the country.

There was always a story and most of them I kept secret. I never wrote them down. They just danced in my mind and whirled through the imagination machine I had built. An imaginative place I would conjure up when life got just a little bit dull. It’s the place that got me into a bit of trouble at school but it has fueled my writing.

Writing became the drawing in my life. It took over when I was 23 because I felt the drawings became too linear and I needed more depth. Writing is our deepest form of storytelling. I think no other medium can compare and it is why I have not been able to stop. I had to keep writing. Despite its challenges, writing became my passion and my greatest hope: that I may continue to create and imagine to inspire the young and the young at heart. 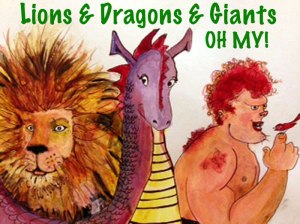 2 replies to “Lions and dragons and giants, Oh my!”