“We are all odd socks in this world, unique from one another. It is when you grow unhappy with what makes you different that you begin to lose yourself.”

The wise words of  Button-Mender the main hero in the animation project called The tale of Odd Socks. This theme of being true to oneself comes up again and again in myth, legend and in the heros journey.

It is a universal theme that we must never forget and it’s present in some of the greatest stories.  Stories like Harry Potter by: JK Rowling and A Wrinkle in Time by: Madeline L’Engle and  the Lord of the Rings by: J R R Tolkein.

These epic stories all portray the same message: stay true and accept your core essence to truly find your inner strength and passion in order to overcome great challenges.

The tale of Odd Socks is a simple story with this same universal theme. It is a tale about what happens to lost socks that go missing in the dryer. It is a quirky and fun film that was  created to teach the common elements in fairy tales to a class of grade 3 students at an inner city school in Burnaby.

The story is about a humble sock called the Button Mender that is chosen by a wise one to stop an evil sock called Thread Ripper.  Thread Ripper is an egotistical sock that convinces other socks to be like him and to hate themselves. The good socks have to stop the evil sock by choosing a hero to venture into the unknown and find Thread Rippr’s matching sock. Once they find the match the evil sock can no longer live among the odd socks and the land is peaceful again. 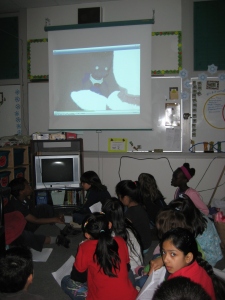 I was fortunate to have Perry Ragoobar as my sponsor teacher. He was a great mentor because he believed in art education and he gave me a lot of creative freedom. I was also allowed to teach most of the time right away and I started my practicum with a Fairy Tales unit.

My objective was for students to know the elements of fairy tales and to create their own story. I began by reading as many fairy tales as possible.

The most common fairy tale elements are:

I helped the students build a solid knowledge of fairy tales. I would read a new story every day and the students would identify the elements of each tale. The students became experts on what makes a story a fairy tale and by the end of the month they were ready to make their own.

I wrote the script and shared the basic storyline with the students. Then they brainstormed the details, by adding character and developing the sets. It was meaningful for the students to physically create the sets and characters.

Building a world allowed them to let their imagination and creativity free.

I had  help from Ken Priebe, who is a professional animator from VanArts.  Ken demonstrated ways of using timing and the puppet movements to help tell the story and add comedic value. 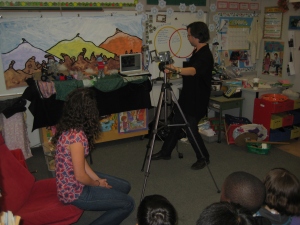 I noticed a real sense of empowerment when the students began to create and see the magic of animation manifest itself on film.

Every student in the class seemed proud and really engaged in the process and I had little or no classroom management issues. They just loved to have freedom to imagine, create and build as a team.

As the project progressed I noticed  more and more of the students would come to class early and quietly work on a prop or a backdrop or a puppet. 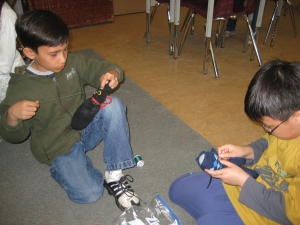 They believed in the process and they thrived in the freedom and art. It was an absolute joy to watch their engagement. Every student came to class excited and ready to work. Also each student brought original ideas and characters to the film. I think each kid felt valued. 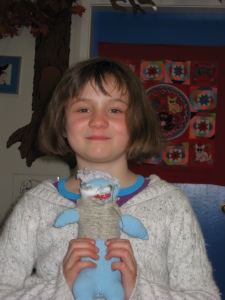 I hoped that the theme of the film would reflect onto the students. That they would see themselves as being beautifully different. That their core essence was crucial to the success of the project.

Sadly in our society  “difference” can be discriminated by our peers, at work or in our families. The idea of being different or “other” sometimes prevents kids and adults from truly accepting who they are and recognizing their unique gifts. I believe it is in our difference that we discover our true essence and in our difference that we can really and truly imagine the life we want to create for ourselves. 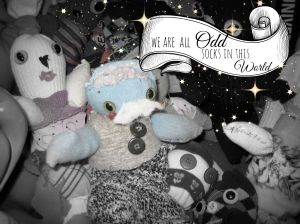